Daze of the Triffids

There are little maple trees all over the yard. In gutters, under small piles of leaves, in the garden. Hundreds of them. This is not an exaggeration. And I suspect this is going on all over the Northeast. Apparently, it's forest season. And I stride manfully and pluck them out, one by one.

It's a cheap feeling of power, being able to root an entire maple tree just between the pointer and thumb of one hand, but I take that feeling where I can get it. 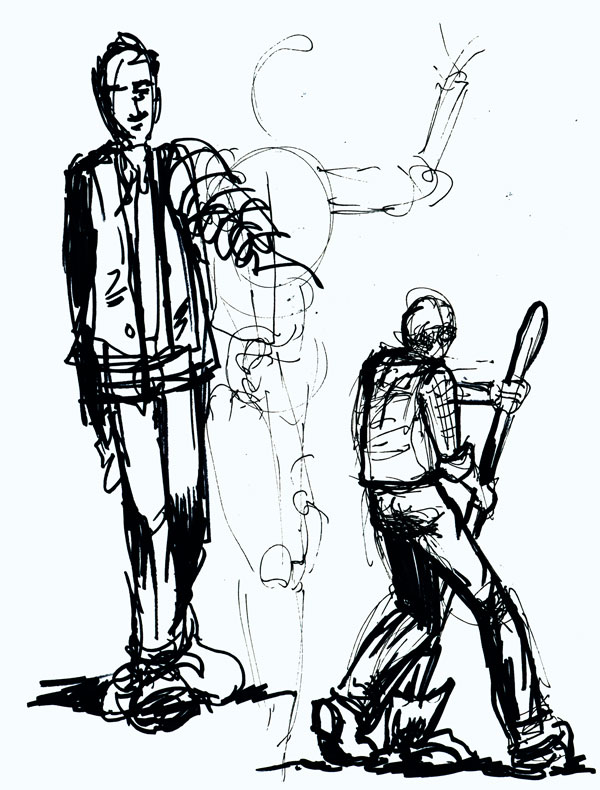 More poses with the shovel. It looks like the body english is getting a little aggressive in that bottom one. Working out some issues with that shovel, I think. Definitely out of character. 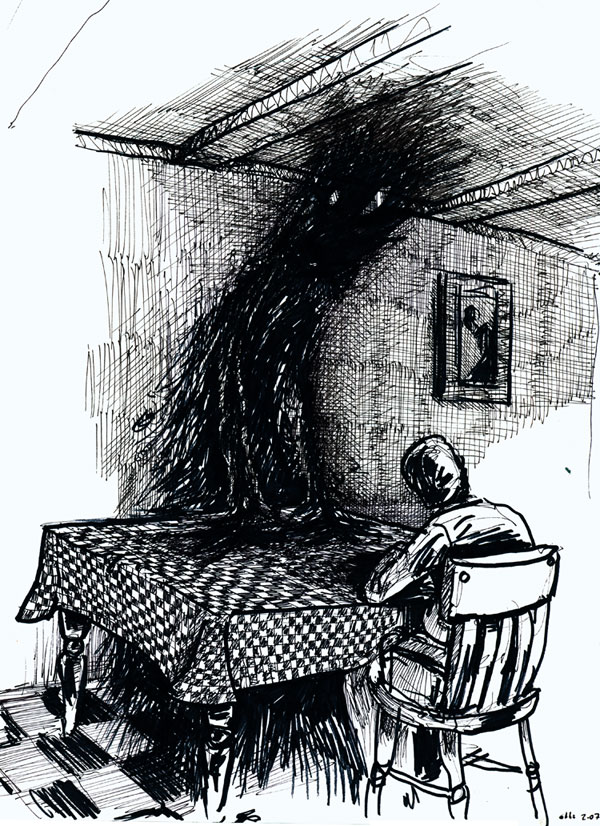 This one refers to itself as "The Spirit of Barren Harvest." Like the Spirit of Christmas Present, only for farmers, and not nearly as jolly. A good sign that something has gone very, very wrong in your life, if this is standing in your kitchen. 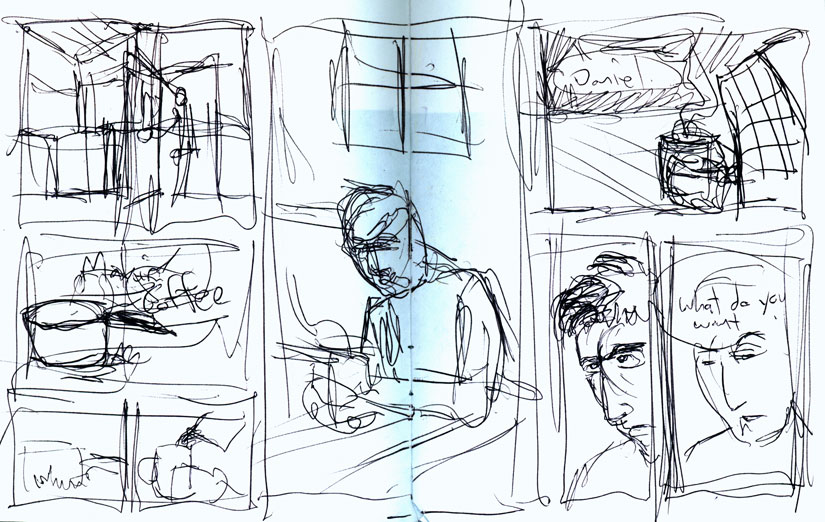 A two-page spread from the 'thumbnail' mock-up of the complete story. Most of my comics start life as one of these - I am aware of the severe lack of drawing goodness, but the point is to get the storytelling worked out first, and then do the purty pictures. Still, I may keep that dirty look the farmer gives the spirit in the second to last panel. 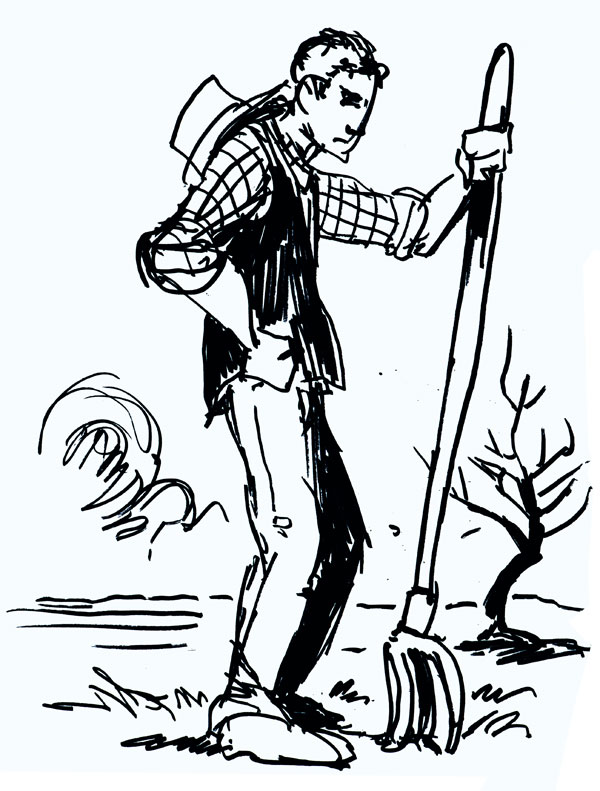 Yet again more poses with the shovel, still, only this time it's a pitchfork and the whole thing has a lame disco air about it. He's also looking kind of pissy, which isn't really a character trait I associate with our farmer. This is the first time I'd worked out the wardrobe, though.

Mugshots. First, he has a mustache, then he doesn't. Magic! The face in the upper right is a 'final,' and is the one I'm using for the comic. Inspired by a quote from some depression-era photographer about the 'harsh faces' of her subjects. 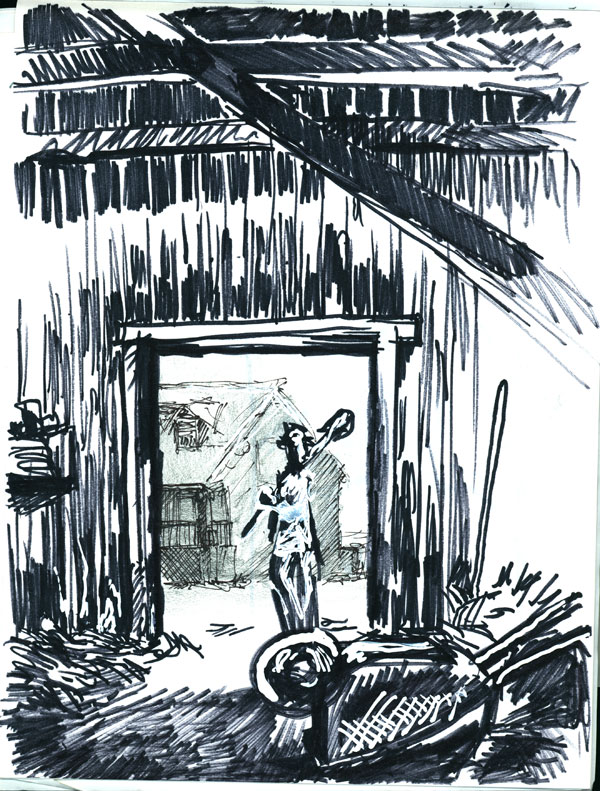 Inside the barn, where the farmer has an encounter with a territorial rooster. I'll no doubt assemble some photo reference for the final, but I do like to do these atmosphere sketches so I can nail down how I want the comic to feel. This is a lot closer in tone than any of the others, which are all either a little or a lot too cartoony for the story.

And here's a prep sketch from "The Fox:" 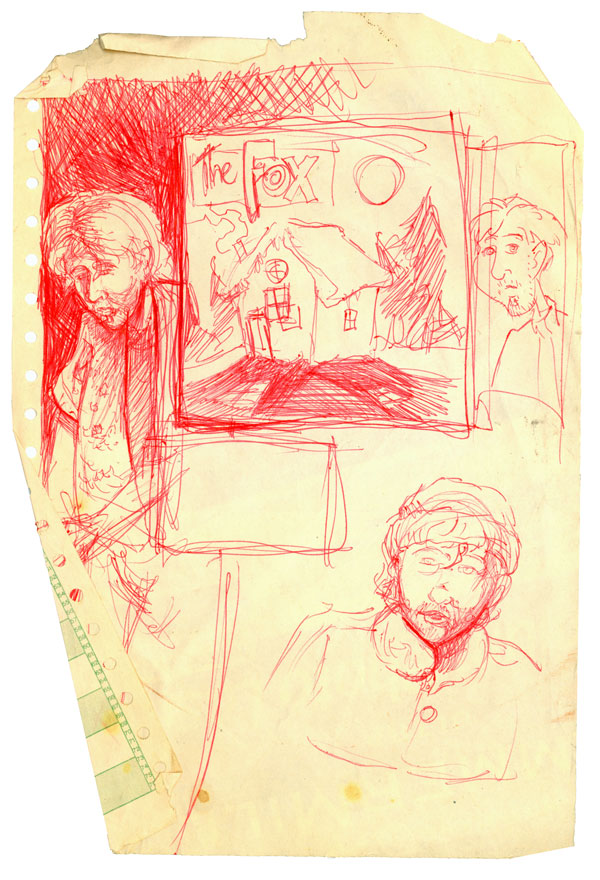 The basic layout is there, but it's clear I hadn't quite nailed down the style contrast. Also: I'm deeply embarrassed by the lameness of the 'Dave-in-Coat' in the lower right hand of the page, but I'll take it as evidence that at least my sketches have gotten better in the intervening decade+2. I know I've seen a more advanced prep for the first page of "The Fox" lying around somewhere; I'll have to see if I can track that down for the 'archives.'

The only reason I really like this one is because it's drawn on the back of some really, really old school computer paper, which my parents used to keep in a wok for scrap paper.

That's it for today. Sorry if it's a little blah - maybe I'm alone in this, but I always found these 'process' sketches from other artists pretty neat. Tomorrow, I'll put up something a little more complete, for those who prefer their art a little more cooked.