Had class tonight. Not a class I'm taking, but a class I'm teaching, a 'how-to' for comics - only given what's going on in this class, it's not an accurate descriptor to name what I'm doing in there 'teaching.' Oh, well. It's still an enjoyable experience, but half the class is falling in love and simply giving up drawing, as a result. It's a little odd, because the two lovebirds are classic overachievers, but when they get together, they give each other permission to lay back. I was hoping they'd channel their talents and feelings into some kind of extra-cool collaborative effort, but that's not in the cards.

Anyhow, one of the reasons I started teaching the class was to urge myself to return to comics as well, and it's nice to see that I've successfully broken through some of my old barriers. That's happened to me before; when I was in college, I took my junior year off (and spent time with the B.U.M.'s, which is an anecdote for another time) - and in that entire 16-month period, I only did one drawing; an incomplete self-portrait - which seems appropriate, now that I think about it. But, somehow, when I returned to school the next year, my work had improved measurably on many counts. Hard to explain just how that happened, since many of my hang-ups were towards the technical end of the creative spectrum, and that's not the kind of thing you just 'get' by marinating. You really have to work at these things. Perhaps I was sleep-drawing all that year?

Here's the initial prep sketch for the first page of the 10 (or so) page story I'm working on: 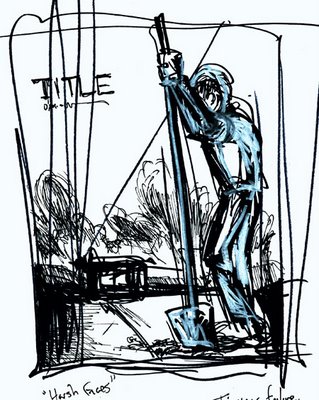 Drawn cold one night at the hospital - my wife (henceforth known as 'Yesenia') had sliced her finger while cooking. A pretty common event for us both, sadly. Which is why I prepared this time out; I brought my sektchbook, actively trying to generate story ideas. Blissfully, the first sketch came wrapped up with an almost complete plot and theme, which is another rarity for me.

A little difficult to see what's going on there, but maybe the next phase will clarify: 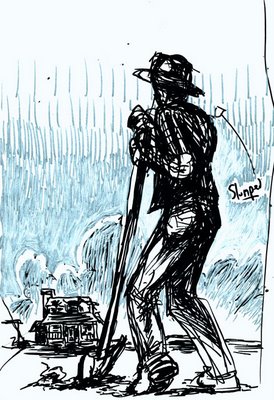 Don't know why (that's not true, I do know why), but the image of this depression-era farmer resting his weight on his shovel with the wasted fields around him and his home in the near distance really sparked for me. As I noted before, it's rare that an image comes to me whole - and when it does, I do my level best to get it out of my head intact.

In between the first and second version of the image, you can see that the farmer has gained a wardrobe - most notably a hat and a vest - and gone from assuredly holding the shovel erect in his left hand to using it to support his weight.

Today, I finished up the pencilled version: 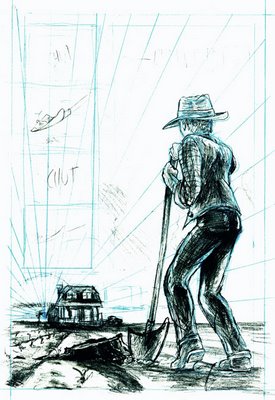 Lousy scan, but you can kinda-sorta see that he's now trying - and failing - to dig out an old stump. Another detail that seemed thematically just right when it occurred to me. In my story outline (written after ruminating on the first sketch for a few days), I simply note: "A farmer works in the field. The few crops are withered and the ground is dry and dusty." Evocative, sure, but writing 'working in the field' and drawing the act of working in the field are two very, very different things. I trusted that I'd come up with some actual real farming goodness to add convincing detail, but 'working' can mean just about anything, for heaven's sake. I should've just drawn him balancing his books out there, or, I don't know, giving handjobs for green stamps. Farming and Prostitution are the two oldest professions, aren't they? And having our hero reduced to such sad circumstances would have really added a layer of poignancy to the plight of the dustbowl farmer.

Anyway, went with the shovel and the stump. I guess that means that I can get the comics code seal?

There's also the addition of a four panel floater, which will alternate sound-fx of digging ("Chut") with a close-up of the shovel ejecting dirt and debris. And the vague farmhouse has now become my house, because it's period-appropriate (built in 1915), and because any time you can draw something from life and not have to make stuff up is time saved.

I got about half the page inked tonight - but I'll hold off posting until that's complete. I'm also thinking of doing the story instead in watercolor with a sepia tinge. Watch this space.