Since this is going to be a week of incredibly tight work deadlines, the writing on Subway Rambler is going to be sparse until Wednesday night. But that doesn't mean I'm going to leave you in the lurch!

Over the next couple of days, I'll upload some (hopefully) neat things from the archives, that will eventually be part of the fuller Copper Man site once I get around to refurbishing it, this summer.

First up: a five-page comic from the mid-90's. It still contains a lot of me rambling (which I do quite a bit most of the time, in almost every medium). 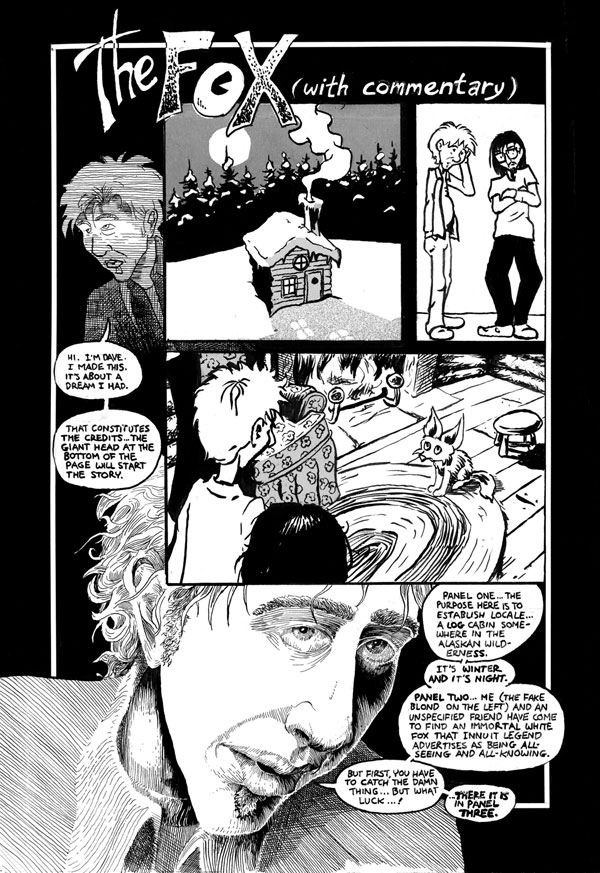 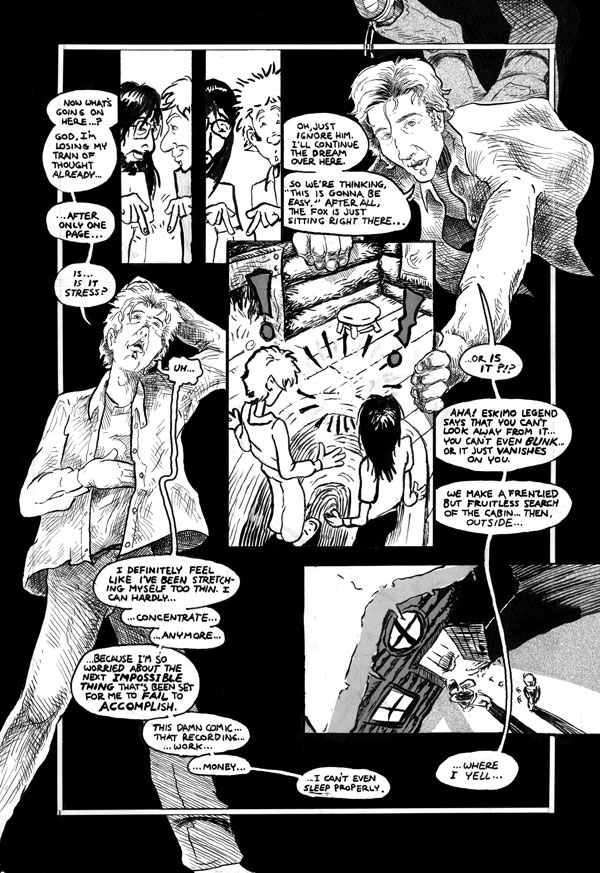 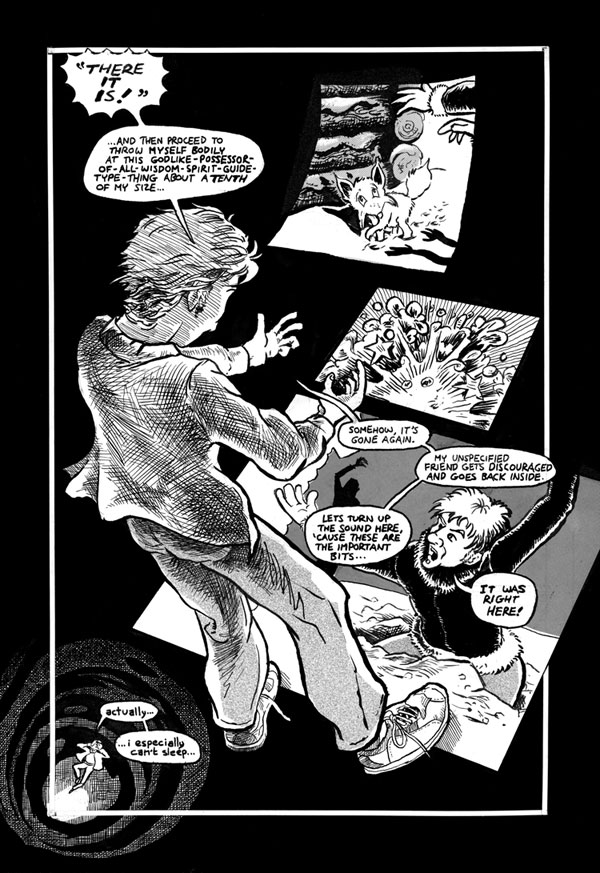 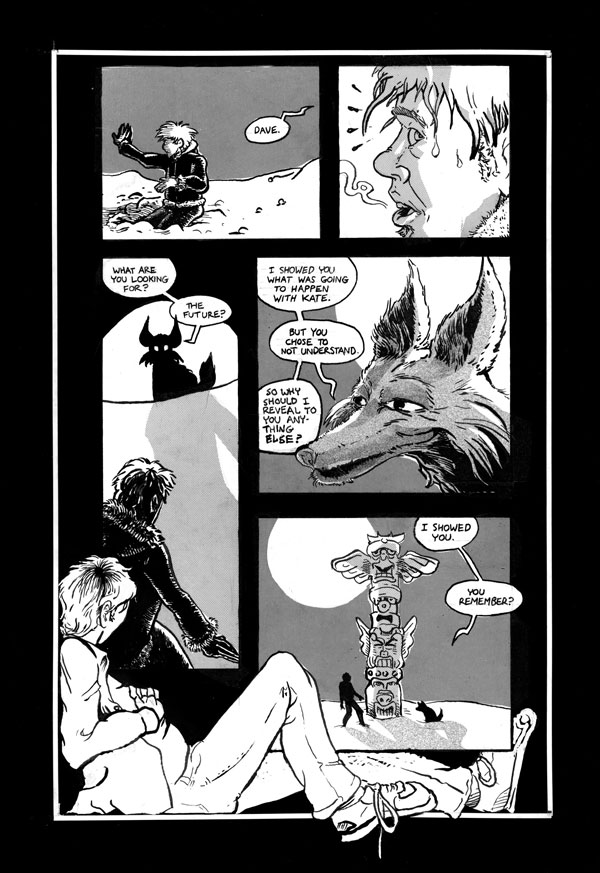 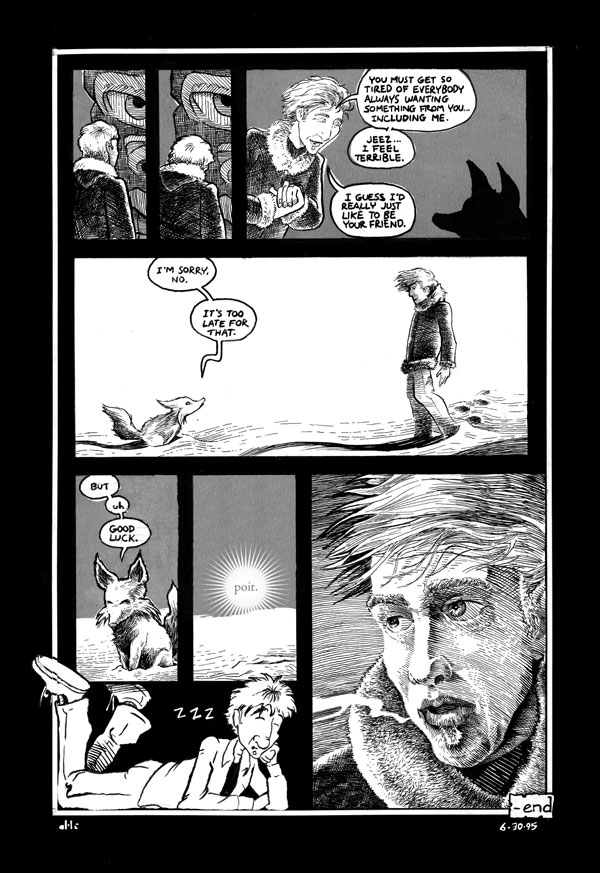 A little explanation about the story:

As noted in the first panel, this was, indeed, a dream I had in 1995. The reason it became a comic is unstated in the story (although I did toy with including it). The fox dream was one of those dreams you have maybe once a decade where you feel like you haven't just been dreaming, but you've experienced a gen-you-ine visitation. The fox wasn't a part of me, but an outside voice trying to impart some hard-won wisdom to me.

Of course, that's a function of the dream itself - reading between the lines, you can tell that 'Dave' has already done a good job of avoiding all the very, very obvious signs, in part because he's demanding some kind of cosmic truth. In the end, he misses out on the opportunity to question the fox on more pertinent matters, because he's been hung up on the pointless emotional detritus of a failed relationship, and can't see beyond it.

The segment that people always wonder about is the totem pole, because what I didn't realize at the time (but do now) is that people are hard-wired to get very specific answers, so they're searching for some meaning in that particular image. There isn't any; at least not anything beyond the dream meaning it has for Dave. So don't drive yourself crazy trying to figure out what story those totem figures are trying to tell.

As far as the meaning it has to Dave, I've already said: he's being confronted with the knowledge he's been hiding from himself - that he's been hanging on to his bad feelings at the end of that relationship for far too long, and it's preventing him from getting on with his life. More than anything else, working on the comic was a really great way for me (the real Dave, not the dream Dave) to put it all to rest, so the dream was a self-fulfilling prohecy... in a way, the comic became the fox itself.

As far as the graphic aspects of the story, I built in a lot of thematic obsessions I had at the time. The concept of multiple time-lines, that comics allow for (note the split narration), heavy use of blacks, and the sense of different levels of reality, through treating the black as 'space' and the panels as flat images in that space. The most important graphic element is the move from photo-real (not really, but we'll use that term for the sake of argument) for the 'real world' and very cartoony for the 'dream world' to cartoony for the 'real world' and the photo-real for the dream.

As to just what I meant to convey with that style-shift, well, it's open to interpretation. It was a dream, after all.

Anyway, although the comic fails on many levels, I'm still very proud of it. Hope you enjoyed it, and I'll see you tomorrow.

Email ThisBlogThis!Share to TwitterShare to FacebookShare to Pinterest
Labels: comics, dream, The Fox